WOOLF, SUPERMEN & THE FINGERS OF DESTINY

Excerpt from Virginia Woolf's "A Room of One's Own" :

"...Life for both sexes... ...is arduous, difficult, a perpetual struggle. It calls for gigantic courage and strength. More than anything, perhaps, creatures of illusion as we are, it calls for confidence in oneself. Without self-confidence we are as babes in the cradle. And how can we generate this imponderable quality, which is yet so invaluable, so quickly? By thinking that other people are inferior to oneself. By feeling that one has some innate superiority - it may be wealth, or rank, a straight nose, or the portrait of a grandfather by Romney - for there is no end to the pathetic devices of the human imagination - over other people. Hence the enormous importance to a patriarch who has to conquer, who has to rule, of feeling that a great number of people, half the human race indeed, are by nature inferior to himself. It must indeed be one of the chief sources of his power. But let me turn the light of this observation on to real life, I thought. Does it help explain some of those psychological puzzles that one notes in the margins of daily life? Does it explain my astonishment the other day when Z, most humane, most modest of men, taking up some book by Rebecca West and reading a passage in it, exclaimed, "The arrant feminist! She says that men are snobs!" The exclamation, to me so surprising - for why was Miss West and arrant feminist for making a possibly true if uncomplimentary statement about the other sex? - was not merely the cry of wounded vanity; it was a protest against some infringement of his power to believe in himself. Women have served all these centuries as looking-glasses possessing the magic and delicious power of reflecting the figure of man at twice its natural size. Without that power probably the earth would still be swamp and jungle. The glories of all our wars would be unknown. We should still be scratching the outlines of deer on the remains of mutton bones and bartering flints for sheepskins or whatever simple ornament took our unsophisticated taste. Supermen and Fingers of Destiny would never have existed. The Czar and the Kaiser would never have worn their crowns or lost them. Whatever may be their use in societies, mirrors are essential to all violent and heroic actions. That is why Napoleon and Mussolini both insist so emphatically upon the inferiority of women, for if they were not inferior, they would cease to enlarge. That serves to explain in part the necessity that women so often are to men. And it serves to explain how restless they are under her criticism; how impossible it is for her to say to them this book is bad, this picture is feeble, or whatever it may be without giving far more pain and rousing far more anger than a man would do who gave the same criticism. For if she begins to tell the truth, the figure in the looking-glass shrinks; his fitness for life is diminished. How is he to go on giving judgment, civilising natives, making laws, writing books, dressing up and speechifying at banquets, unless he can see himself at breakfast and at dinner at least twice the size he really is? ...The looking-glass vision is of supreme importance because it charges the vitality; it stimulates the nervous system. Take it away and man may die, like the drug fiend deprived of his cocaine..."
Posted by Aaron B. Turner at 1:39 PM 7 comments: 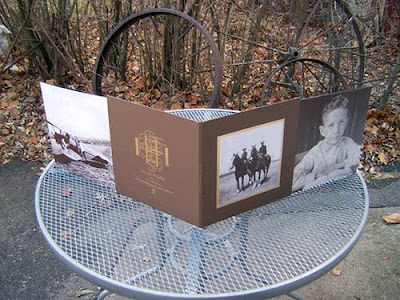 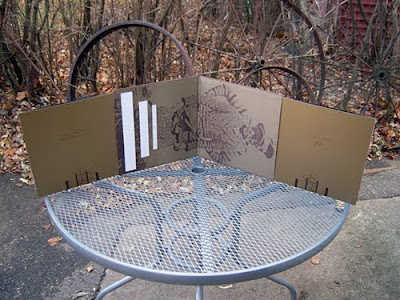 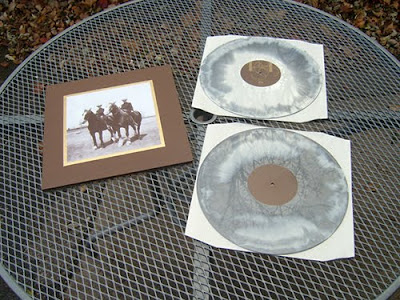 Above: shots of the now available 2xLP version of the Lotus Eaters album "Mind Control for Infants". Photos courtesy of Stephen O'Malley.

The vinyl is currently available from Taiga Records, and I will hopefully have some soon to bring along for the remainder of the Isis tour currently underway. Thank you Taiga!
Posted by Aaron B. Turner at 10:19 AM 6 comments: the online version of PRINT magazine has just posted an article about heavy metal design - the article contains interviews snippets with me, stephen o'malley, and seldon hunt, as well as a few selected images of our work. check it here . 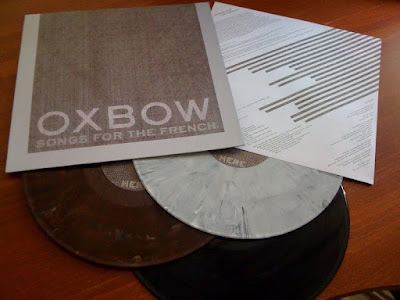 as mentioned in the last post, the new oxbow 12" "songs for the french" is now available via oxbow on tour, hydra head mailorder and webstore, etc. above is a picture of the fancy vinyl colors, sleeve and insert. see here for more details of the artwork.
Posted by Aaron B. Turner at 10:03 AM 1 comment: 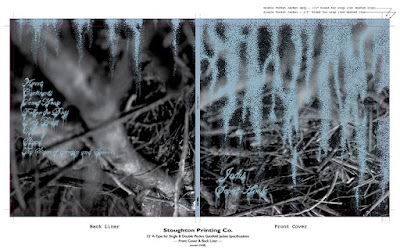 preview of alternate artwork for LP version of the Jodis "Secret House album. to be released via hydra head records in december. cd available now. photos for LP version and design assistance by faith t coloccia. LP (and japanese/daymare cd version) will contain track not included on US cd version. 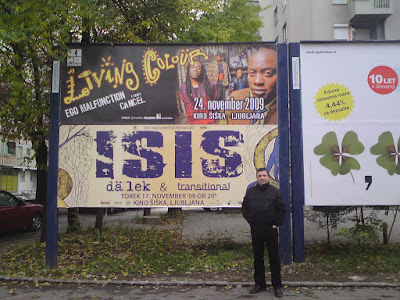 billboard in slovenia for upcoming isis show. never would have imagined we'd be sharing public space with living colour... or playing in slovenia for that matter. photo courtesy of stephen o'malley. model: peter rehberg. 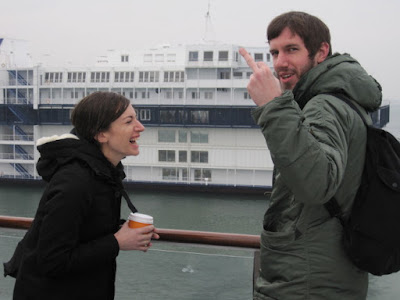 2 mamiffers on the boat from sweden to finland - photo courtesy of john overstreet. last mamiffer show on the isis tour tonight in prague - thanks for having us along other isis', and thanks to those that came early to listen us play live renditions of mamiffer songs new and old. vinyl version of "hirror enniffer" out now via sige records. all the copies we brought for our portion of the isis tour are sold out. remaining copies soon available via hydra head, conspiracy, select retail outlets, and possibly future mamiffer live shows. 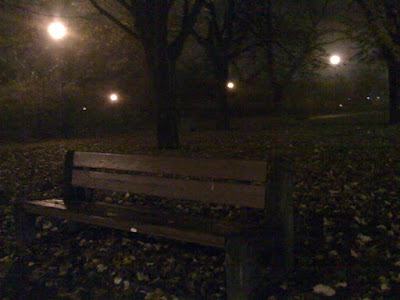 here is a bench in warsaw on a misty night before the isis/mamiffer/dälek show the following day. nice to walk about warsaw at night and nice to play there again as well. 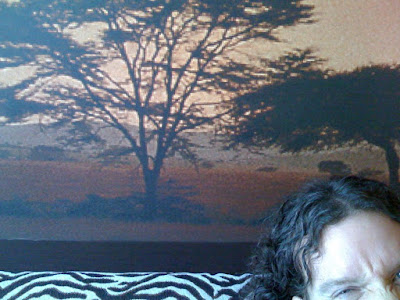 a hairy guy sitting on a zebra print bench with pixelated african nature scene wallpaper behind him on a boat sailing from finland to estonia. photo by faith t coloccia.

helpful and/or informative while traveling the lands of perpetual dusk: back bench companion, philip k. dick "divine invasion", marjane satrapi "persepolis", the bug "london zoo", at the gates "slaughter of the soul", bohren and der club of gore "dolores"....
Posted by Aaron B. Turner at 7:18 AM 5 comments: