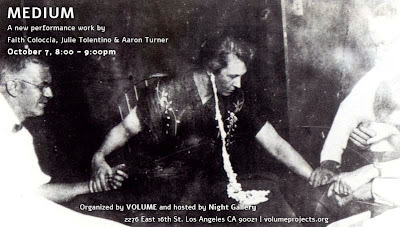 Organized by VOLUME and hosted by Night Gallery.

Its visibility may wax or wane, and to the touch it may feel soft, elastic, fibrous or hard. It has the power of self-locomotion, and moves generally with a slow reptilian movement, though it is capable of moving with extreme rapidity. It is capable of both evolution and involution, and is thus a living substance. It is extremely doubtful whether it ever, even in its most perfect formations, actually loses contact with the medium and pursues an independent life, even momentarily, though such a supposition must be borne in mind as being a possibility....

Faith Coloccia is a multi-media artist, graphic designer and composer. She received a B.F.A. in Fine Arts from Otis College of Art and Design. She is currently focusing on her experimental music project Mamiffer, as well as various audio and visual works under her own name. She is the co-owner of SIGE Records and Publishing.

Julie Tolentino’s career spans over two decades of dance, installation, site-specific durational performance with diverse roles of host, producer, mentor, collaborator with artists such as Meg Stuart, Ron Athey, Madonna, Catherine Opie, David Rousseve, Lovett/Codagnone, Juliana Snapper, Diamanda Galas, Stosh Fila, Robert Crouch/Volume, Juliana Snapper, Elana Mann, Mark So, Gran Fury, CANDIDATE and Rodarte. Tolentino is deeply influenced by her extensive experience as caregiver; Eastern and aquatic bodyworker; a highly disciplined contemporary dancer; and as proprietress of Clit Club in New York. Her diverse and exploratory duet/solo practice includes installation, dance-for-camera, and durational performance engaging improvisation one-to-one score-making and fluids, including blood, tears, and honey. As an extension of her practice after twenty-five years in New York City, she designed and built a solar-powered live-work residency in the Mohave Desert: FERAL House Studio, where she explores the remote forms of physical inquiry through landscape and texts. She has received numerous grants and fellowships. She is currently the editor of Provocations in The Drama Review-TDR/MIT PRESS. Her works have been commissioned by The Kitchen, Participant Inc., Invisible Exports, Performa’05; and in the UK by Spill Festival, Tramway, DanceExchange, and queerupnorth. Recent tours include England, Europe, Myanmar, the Philippines at Manila Contemporary, Green Papaya Gallery and Theaterworks in Singapore. She has been presented at Broad Art Space at University California Los Angeles (UCLA), Los Angeles Contemporary Exhibitions (LACE), Commonwealth & Council, Move-In Honor Fraser, PSI19 at Stanford, Install Weho, The Reanimation Library Project in Joshua Tree, FIRE IN HER BELLY at Maloney Fine Art and Within at Cypress College Art Gallery. Near future projects include a residency at the New Museum, Performa’13, HDTS 2013, Sur Biennial #2/Cerritos Art Gallery and new work at UCLA, NYC Abu Dhabi, and Yerba Buena Center for the Arts in 2014.


Aaron Turner is a musician, singer, and graphic artist who has been publicly active since 1995.  He is most widely known for his role as guitarist and vocalist for the post-metal band Isis, while also participating in numerous musical projects such as House of Low Culture, Jodis, Old Man Gloom, Lotus Eaters, Greymachine and Split Cranium. He has collaborated on stage and in the studio with artists such as Masami Akita/Merzbow, Jussi Lehtisalo, Stephen O'Malley, Tim Hecker, Justin Broadrick, Daniel Menche, James Plotkin and many others. Performing live for nearly two decades, Turner's appearances have ranged from basements and DIY youth centers to international festivals and museum/galley spaces. His work has been largely informed by a lifetime involvement with the underground metal and hardcore scene, but has often materialized in highly abstracted forms that utilize processes of electro-acoustic exploration, emotionally rigorous improvisation and long form compositional techniques. Of particular interest to Turner is the tension created by purposeful juxtaposition of recognizable/melodic song structure with disruptive textures and other "non-musical" sounds. Though his music has taken many shapes, the central goal has remained constant - a overriding desire to generate sound that summons strong emotional responses for the listener as well as the performer.

In addition to his many musical projects, Turner is the founder and art director of Hydra Head Records, a long running independent record label focused on heavy and experimental music. In partnership with his wife Faith Coloccia, Turner also founded the SIGE Records label, with the primary intent of publishing their own works, as well as that of their ever widening circle of collaborators. His current and near future projects include an ongoing collaboration with William Fowler Collins, a new project with Brian Williams/Lustmord, and continued performances and recordings with Mamiffer, House of Low Culture and Old Man Gloom.
Posted by Aaron B. Turner at 4:21 PM