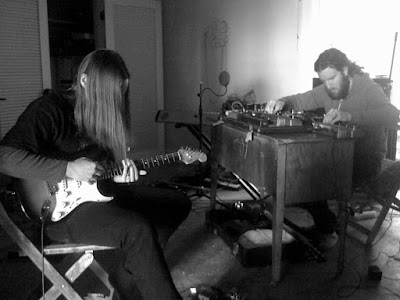 The collaboration with William Fowler Collins is now underway. Over a four day session in WA earlier this month, we worked on a number of foundational pieces with the intent of going back to these raw recordings later and building up finished tracks around them. I have no idea how long it will take us to finish an album from this point, but the initial results are promising and we're both feeling pretty excited and motivated by the results. In the meantime, I highly recommend checking out William's new album "The Resurrections Unseen".

Also: the Pyramids/Horseback album (for which I did some artwork and mixing), is coming out this Friday. Foxy Digitalis posted a nice review of the album here. Here is a recent interview I did with a Mexican website La Hoja de Arena - thanks to Alfredo Gallardo Avila for this one... They also did a full feature on a select group of Mexican bands which you can access here.

The Thou/Mohoram Atta split fuckin rules! If you haven't heard the Thou/Leech split, I strongly suggest checking out that one too.

great to see your beard is back! looking forward for whatever!