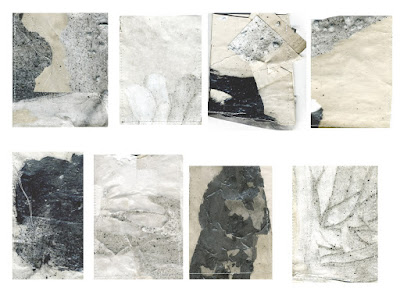 The long planned/long delayed House of Low Culture/Mamiffer split cassette has finally been produced to coincide with the recent and upcoming Mamiffer/HOLC tour dates. The tape features one new track by each band - HOLC: Perverted Scripture / Mamiffer: Silent Night. The covers were handmade by Faith Coloccia, using the original artwork generated for Mamiffer's most recent album "Mare Decendrii". It has been released by SIGE Records in an edition of 42 copies. The release has been or will be available at recent and upcoming Mamiffer/HOLC live shows, and as of now a few copies remain for mailorder. Go here for more details.

Red in Tooth and Claw said...

This looks great. I love the handmade artwork. I just wish I had the money to purchase it. Btw, I was wondering how I would go about posting a download link for a pdf book I made? I remember you had a downloadable portfolio of some of your work that you posted a while back. I'm basically trying to do the same so I thought I'd ask.

damn! all sold out. are there gonna be anymore?

I missed it and am crushed.

Are you ever putting these tracks up for MP3 download?

1. Any plans on releasing "normal" HOLC album? I mean usual CS just like Edgar's Lament - at the right moment it's the latest full-length.

2. Why not to collaborate with the Lustmord? You both made real lots of collaborations.

To answer a few questions:

-No, there will not be anymore of the HOLC/Mamiffer CS made. However, alternate versions of both tracks will be available on more widely available future releases. There may be MP3 versions eventually, but not any time soon.

-There will be a new HOLC full length album this fall on Sub Rosa and Taiga records entitled "Poisoned Soil". No plans of a collaboration with Lustmord, though the idea is certainly appealing....