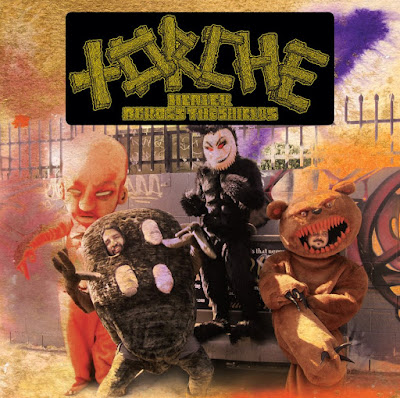 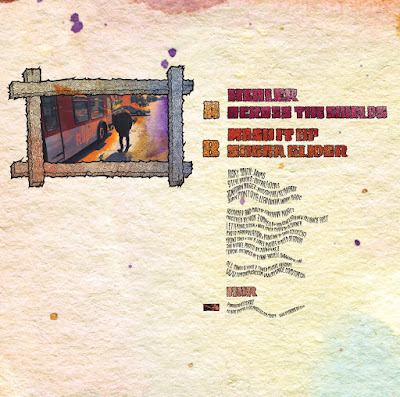 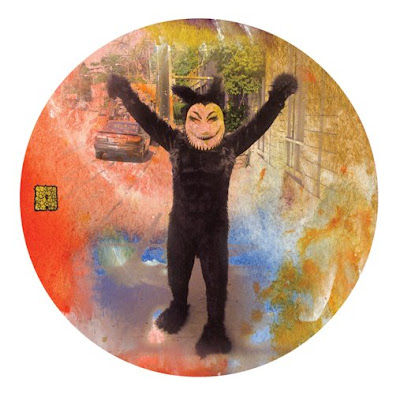 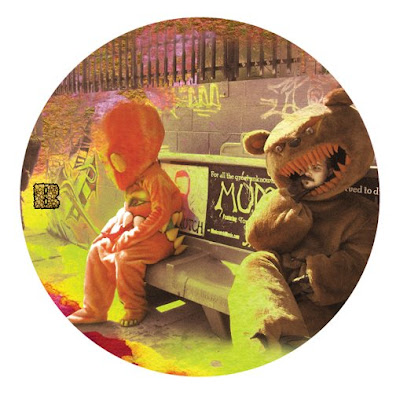 above - images form the forthcoming torche 12" ep. top to bottom: front cover with sticker (black ink on gold metallic foil stock), back cover, A + B side LP labels. the photos were supplied by reed segovia and mark thompson, and the background watercolors were made by faith coloccia.

a quick response to comments left in regards to the last post about the election of barack obama and my related enthusiasm: to clarify, i don't think obama is a savior of the world or even the US, nor do i believe him to be perfect. i don't believe that all or most of the massive problems we currently face (globally and nationally), will be solved quickly and cleanly in the next 2, 4 or even 8 years. that said, i do believe that obama is a far sight better than what we've suffered over the last 8 years, and certainly can't make things worse than they already are - and even provides a formidable prospect of improvement. i am perfectly aware that he is fairly middle of the road as far as his record is concerned, as was the rhetoric espoused during his campaign, and also as exemplified by his choices for his cabinet. he is however the first presidential candidate in my lifetime (to have had a real shot at the presidency), that i have found in any way inspiring or truly promising. considering there was widespread slavery in the US a little over 100 years ago, and rigid segregation in many parts of the country well into the 1960s, the election of barack obama is a significant statement in historical terms for that reason alone. another important aspect that i've considered in regards to prospect of an obama presidency is this: while a really radical shift is needed on many levels in this country, it is highly unlikely that a candidate with equally radical views would and could be elected to the presidential office. obama may be able to affect at least some perceptible level of change due to the fact that he IS fairly middle of the road and therefor won't draw continual and vehement resistance from the right. it's inevitable that the post election enthusiasm will wane and a visible degree of cynicism will set in once he takes office - the reality of his presidency cannot possibly live up to the idealistic expectations that many have pinned on him. there is a long hard road from this point forward towards a recognizable degree of ascendence, but i remain optimistic that obama is a truly capable catalyst for raising us up a good measure from the depths we're in which we're currently treading.
Posted by Aaron B. Turner at 8:23 AM

Don't know where to post that, so: I was at "La Maroquinerie" yesterday. That was great: love this music, love this band. Come back as soon as possible in France and I hope we'll have soon a "LIVE V" soon ...

will there be any way for us non-vinyl Torche lovers to get the new tracks from this 12"?

Good day. I've been reading your blog for quite some time and , I must say, been enjoying it. I've been a fan of your design work since I first got Celestial way back and obviously all the Hydra Head releases you've done. It's been great seeing you develope through the years. Recently I've noticed alot more of your work seems to be actual drawing. Which is great I must say. Pretty much all the artwork I do (as a hobby, nothing like your standards) is drawings first with pencil then Pigmint ink drawing pens and finally scanned in. I always have trouble getting my sketch work looking as good once scanned in as it does from the fresh origional sketches. I've been messing around in illustrator but still struggle to get it how I want it (bearing in mind im technically inept). You seem to achieve my desired effects. Any tips? You know to make it look fresh, neat, smooth but still raw drawing feel?

I actually met you last year in Sheffield, UK. I was Niko and Eugenes freind who took them to the show that night after Eugene recorded with my band "manatees" in my home town. Short bearded fellow, who managed to convince your manager I was allowed a drink. ha.
Anyways, enjoy your current Euro tour and all the best with the new Isis stuff.
easy.

Oh yeah. Also check out my pathetic blog http://alexmacarte.blogspot.com/.
There's some sweet videos of some good ol' prog to entertain on your travels.

One week ago I took a flight from Oporto just to see you in London, it was my second Isis show (both in London). I just want to thank you for your music, I can't describe what I feel and the importance that has for me.

Please please please convince Vincent that it's time to visit us, I'm here to put your shows in Portugal. By the way, I was the guy thak asked you your pick, thank you for that too :)

Do you think it would be a good idea for Isis to release an acoustic album?

Great stuff. You inspired me to start my own blog. noeldavila.blogspot.com Take care...

who made the wicked assed costumes man?

Aaron, regarding "your comments to your comments". The situation we're currently facing now in terms of economy in the U.S. is very unique. Fed's been doing every lil thing possible to make an impression it has all issues under control. Of course it hasn't and the truth is far from that, hence NO president/puppet is able to make any change. That's the reality of power distribution. The problem of credit bubble is unmanageable under these circumstances and we (meaning Earth's population) will see a catastrophic scenario come true for the world's only so far unquestionable superpower. It's just a matter of time. No politician or publicist can turn back the river with a stick. The change in terms of race is though completely irrelevant. No matter black or white the cat is only as good as long it catches mice. And this cat won't catch mice because they set the rules and the disease is systemic - far beyond cat's comprehension. This time it's different. So hope for the best and prepare for the worst. I hope you can draw conclusions from these short verses. You are an important artist and the world needs your art. Fuck illusion of safety. You are the only responsible just like we're all. So god help us - if you still can.

Bush had shoes thrown at him.

I can't say for sure, but i'd bet Obama won't ever have shoes thrown at him...

Yeah: he's going to have a honeymoon period, and it won't last forever, but i'd also bet he'll still be way more popular than dubya ever was.

Charisma. That's what it is.

I don't give a fuck what colour he is, or where he came from, but [globally] this world needs someone like him right now. His charisma coupled with his position make his presidency a fantastic opportunity to turn things around.

People don't get confidence from taxpayers lending banks money, or manufacturers being propped up by government bonds.

They get it from seeing strong charismatic leadership. Action not words. Upholding values. Being straight with people. Respect.

You cannot put a price on it.

More importantly, did you enjoy ATP? I certainly did.

Oh the new track you played in Paris is the best piece of music i`ve ever heard! Come back to Moscow ASAP please!

The work for Torche is quite good-looking. I wish they were a better band.

Obama is also quite good-looking; can he be a better man?

aaron just wondering if you would grace us with the title of the new isis song since some vids have leaked onto youtube.

hey aaron, do you ever use last.fm? it'd be a neat way for fans to stumble upon great new music, especially considering your taste and recommendations.... just a curious question/suggestion if you don't have a free account on there already. :)