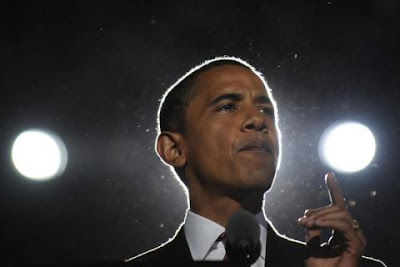 it's a few days after the fact now, but i just wanted to express my profound elation in regards to the election of barack obama. like many other people of my generation this seems to be one of the only truly positive socio-political events to occur during our lifetimes, and perhaps the paramount one - at least as far as this country is concerned. as i watched the poll results roll in i felt a greater sense of joy than i would have even imagined possible in the final moments of a presidential race, and that feeling grew even more pronounced when his victory was declared. i was lucky enough to be able to share these moments with others who are not only dear to me, but shared similar feelings of happiness and great relief - my girlfriend, brother, and my sister-in-law (as well as a good many other folks via phone and text message). all were in agreement that this was a profoundly moving and important occasion, perhaps unlike any other we had known.

though obama has certainly been handed one enormous pile of shit to shovel (far more than any other president in the last few decades), he seems more than capable of the job, formidable as it is. i've never had much confidence or enthusiasm about any major US politician (let alone president), and perhaps i'm pinning too much hope on our new president elect, but if he does even half of what he has proposed, our currently dismal situation can only improve from here on out.

thank you mr. obama for providing a glimmer of light in this uncertain age. thank you to everyone who helped make this possibility a reality.
Posted by Aaron B. Turner at 9:11 PM

agreed completely, man. even though i knew i was full of stress and concern about this election, the emotion and relief i felt when he won were a bit unexpected in their strength...

Even from over the pond we can feel the effect this man could have.

I don't understand this lame duck session though ... why can't he start NOW!

Massive relief here north of the border as well. However, I really do wonder how much can really be done and how soon. I don't really believe that absolute power lies within the hands of any leader. He represents hope and that is definitely what North America needs right now. But god, he is facing an insurmountable task as the previous administration made a mess of epic proportions. Good luck with this guy, the sensible Canucks are rooting for ya. Fingers crossed.

This was the first election I have ever been able to take part of (I'm 19 years old), and it is nothing short of exciting to know that I helped participate in one of the country's most important presidential races. I can safely say that was the happiest I have been in a long time. Keep the posts up and good luck with the next Isis album!

It was intense to feel those two opposite extremes simultaneously. Great fear, and great hope. Then the rush of emotion after he won. This world can be so dehumanizing, and that moment was so real. It was awesome.

"my cup of hope is full, but i sip it slowly for hope is a powerful drug"-immortal technique

This being the first election I could vote in, I'm proud to be apart of it.

I look forward to seeing the changes, and as you wrote, hope he comes through with what he has planned. Politicians are never 'true', but to me, he seems genuine and real. I hope this remains the case.

I'm interested to see the change in music... as so many artists seem to feed off of the negative vibe surrounding the current (well, hopefully past) political times. Will everything start to sound much happier?

In my opinion, McCain and Obama are two sides of the same coin. One side you have McCain wanting to continue our misadventures in Iraq, and on the other, you have Obama making questionable and hostile statements against Pakistan, Sudan, China, and Russia (most likely due to his political grooming from Zbigniew Brzezinski, the CFR, and the Trilateral Commission). We'll be trading in one war for the next!

Both McCain and Obama championed themselves as advocates of the bailout, which takes our money and puts it back in the greedy pockets of Wall Street. We've already seen the repercussions of that, haven't we?

Neither of them are concerned with with the daily influx of illegal immigrants, and being a California resident, I recommend you look into La Raza and supporters of the racist "Plan of San Diego".

There was no real need to focus on McCain during this election, for we all knew his modus operandi, years in advance. I think McCain was meant to fail. It helped faciliate the ushering in of our "savior" Barack Obama; providing U.S. citizens with a false sense of hope and security that a new day is upon us. That the dark ages of a failed administration would be washed away in a tranquil sea of peace, prosperity, and worldwide stability. The sad reality is that it's a new face, but the same old song and dance.

During the campaign he became a cult of personality, the likes of which we haven't seen since Charles Manson, or Hitler's magnetism.

Media outlets were quick to label him "World leader"? C'mon...

So Obama stated he would take measures to repeal the Patriot Act, and then voted to extend it. Obama is known to support the Military Commissions Act of 2006, Veterans Disarmament Act (which also includes an addendum to prevent gun ownership of people who have been diagnosed with ADHD), the Violent Radicalization and Homegrown Terrorist Act, which is broad and dubious in its definition of what a "domestic terrorist" actually is.

Soon we may not be able to peacefully organize and protest, because it goes against the interests of the establishment. I'm not saying this will happen next week, these things happen incrementally; under our noses. Hell, the Patriot Act was hastily passed, late in the night, before anyone in Congress even took the time to examine the document and the severe implications it would have. How many U.S. citizens realize that? Picture this (while a bit fantastic in its scope): What if some day, every known copy of Panopticon is set ablaze in the streets, just like the book burnings in Nazi Germany, because it was deemed "subversive"?

With Panopticon, I felt you saw the bigger picture, that all politicians are place-men and only serve the interests of the corporations and their hidden controllers.

"Can you see us? We are watching."

Our presidents aren't neo-liberals or neo-conservatives, they're neo-fascists.

But I'll give Obama the benefit of the doubt since he has yet to govern over us. I wouldn't get my hopes up or expect anything to actually "change" though.

I really wish it was a reason for celebration but I am not convinced that this was the case. Looking at the American polls from European perspective it was more like choosing between Pepsi and Coke since both candidates represented typical mainstream parties. At most it was a democratic ritual to calm the masses and give them illusion of influence. Unfortunately for the States neither of candidates has guts to deliver the change this country really needs. In terms of economy, foreign affairs, reforms - the changes we will observe over the next few years will be minor, just to preserve the fragile status quo between the group of interest. It will of course lead to decreasing status of USA as a world superpower, though it's often unrealized cultural impact will last for many more years to come (as it was in case of Egypt, Greece, Rome, Byzantium etc).

If I didn't like your music so much, I would stop listening to it over your political beliefs. By the way, it's about time for a new OMG album, no? :D

The energy here in NYC was amazing that night. The streets were filled with joy.

Thx for your music sr. Turner. Congratz since Spain.

I recently came accross your blog and have been reading along. I thought I would leave my first comment. I dont know what to say except that I have enjoyed reading. Nice blog. I will keep visiting this blog very often.

I recently came accross your blog and have been reading along. I thought I would leave my first comment. I dont know what to say except that I have enjoyed reading. Nice blog. I will keep visiting this blog very often.

As frustrating it is to have to endure any further Bush escapades, the period immediately following any presidential election is crucial. Without any kind of transitional period, there would be a certain disarray for months.

Better to take the time now to organize than to waste his first few months in office to do so.

The lesser of two evils I think...

Obama is still on the left-to-the-middle side of the right wing. That's the consequence for the USA of having a duality of state.. (I mean Republicans and Democrats)

Where is Raplh Nader when you in the USA need him the most?