HOUSE OF LOW CULTURE/MAMIFFER/HEMINGWAY live in the northwest! 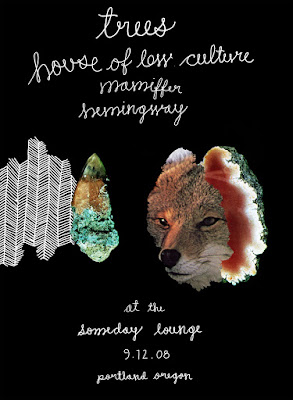 this coming weekend house of low culture will be doing 2 (possibly 3), live performances in the northwest along side mamiffer and hemingway, and in portland with trees as part of their record release show. here are the specifics:

house of low culture will be performing unreleased material, and to the best of my knowledge mamiffer will as well, and possibly hemingway too. i'm hoping to have a new HOLC cassette release ready in time for the shows, but we'll see if those come into being before the deadline. mamiffer will have the new "hirror eniffer" album available to the "public" for the first time to coincide with these shows - record release performances of sorts, even though it may be an unintentional coincidence. more on/from mamiffer here . more on/from hemingway here

"...until we are all ready to make real sacrifices I just see us spiraling downward.

I mean, are we ready to curb oil consumption in everything we do?

Touring bands burn a lot of fuel, so does shipping records around the world. Know what I mean? We're all implicated to an extent, myself included.

And then let's say I make drastic changes and sacrifices and stop buying glorious colored vinyl, and get rid of my car, will everyone else? Or is it all for naught."

in response to that chain of thought i would say this: i am certainly implicated in the problems i addressed in that posting, and i didn't mean to imply otherwise when i chose to quote the info that comprised the bulk of the content therein. in order for change to occur we must make sacrifices, including in regards to the things we hold dear, and it seems crucial to me that we should do so regardless of whether or not everyone else is going to do the same. it's unlikely that we are going to collectively make drastic changes that will halt these ever expanding problems, but if we can individually make steps towards lessening the current rate of damage it certainly seems worth doing so. whether that means trying to drive less, consuming fewer commercial goods, voting for a candidate with more sensible energy policies, remembering to turn the lights off when we leave the house, or committing to studies in the realm of alternative energy sources, every choice and action we make in this direction (seemingly insignificant though they may be), is a step towards a future of greater promise.... though as someone else alluded to in reaction to the same post, the world may be better off if we wipe ourselves out sooner rather than later. it is worth considering that humans are only temporary blip in the grand scheme of things and that our time may be drawing to a close. that said, my (possibly) selfish wish is to be able to continue on, with the belief that we can and will better our current situation by stepping forward conscientiously, rather than downward thoughtlessly into oblivion. i don't know whether this makes me an idealistic optimist, a human-centric narcissist, or just utterly naive, but i feel increasingly compelled to contribute (albeit in a very minor way), towards the struggle to be a less destructive presence on this planet...

just on the topic of global warming...

i get sick of people saying 'what's the point of me switching off that light, or recycling that beer bottle whilst Bush renages on Kyoto, America belches out tonnes of shit and China is doubling that with no recourse'.

I'm not saying people should do it for their own good, or their own fucking selfish conscience.

I say: do it for the future, everyone's kids and their kids. Get it into people's everyday activities. hand it down as basic good practice, like wiping your arse* or typing an email.

*although please note Sheryl Crow advocates using only two sheets per wipe as less trees are killed per dump. Yep - it's a funny thing, but it's deadly serious.

I think that's a great point to clarify upon and you don't sound naieve in the least, in fact I would qualify that statement to be that of an optimistic & progressive thinker.

this is off-topic from this current post,and for that i apologize, but i noticed the past few posts were missing your usual fun lists of recent inspirations in the realm of music/literature/the random and it got me to wonder... where do you obtain most of the music you listen to that's outside of your dealings with hydrahead? do you purchase every single album you thoroughly enjoy & recommend to others, or are you guilty as well the occasional download? (if it's just to check it out before you actually invest your $ in it, is that okay in your opinion?). i know you have access to a ton of tunes, but do you ever have the need to obtain stuff that's just not that readily available?

What are your thoughts on downloading and filesharing in other words?

p.s. thanks for including deathspell omega on a list of yours a while back, i'm thoroughly enjoying Fas-Ite,Maledicti, in Ignem Aeterum

hey, check it out you're on Fecal Face.

I think thats a really good way to look at it. I think if more people had more hope, and they thought that a new world was just as likely as an old one, we would be alot better off. Also I tend to lean towards consciousness manifesting into reality, so a nihilistic prespective will only bring a negative outcome. If everyone meditated on postive change everyday, the world could be a better place in a couple years. I say think positive, be progressive and strive for change in your everyday life. Thats all you can do I think.

Will the show at the Someday Lounge be all ages?

great to read your opinions.
makes you act like a human.

keeleys questions are intresting!
would be cool to read your point of view

I agree with the tone of your thoughts on these matters. I personally feel that the deep root of these problems facing us today stem from our alienation from the natural world, its rhythms and equilibrium. Alone and isolated I am. Not only from the bountiful garden, but from my brothers and sisters around me. And it is difficult to keep the light burning alone, but hearing your thoughts gives hope and a sense of communion. So keep THIS light shining for others to find.

Well, as one once said: nature is neither cruel nor gentle, but indiferent. So bad things will eventually happen.

human nature is to seek the best confort while we're alive. but modern society installed us one false concept, in wich in order to be happy we should consume. richness and the achievement of power have now been "democratized" to its fullest, and wrong notions of the real meaning of richness and well-being have led us to the current situation.

It is urgent, for the maintenance of democracy, that people like us gain awareness. Our actions might not be as simple as protest. Protest nowadays leads nowhere most of the times. Our actions start by thought, by wishing for a real change based on knowledge.

because the world will come to a political state on new dictatorships before we know it. If our way of life keeps deteriorating as it is, we will soon riot, leading to what we all know.

In short term, we shouldn't rely ourselves on modern finance or this dying capitalism. Money shouldn't be abolished, but fairly distributed. current notions of private proprierty and market economy are obsolet, we are led to believe that money is the only way to fullfilment. Well, it is not. And once we all stop thinking that vations on the beach, SUVs and naked women by the jaccuzzi are reahappiness, things just might change.