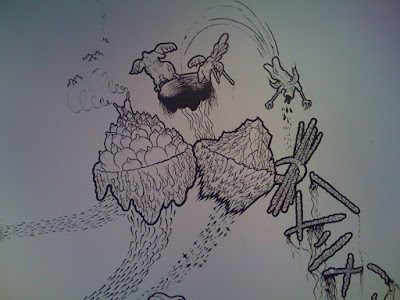 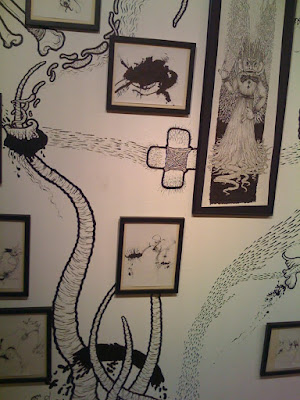 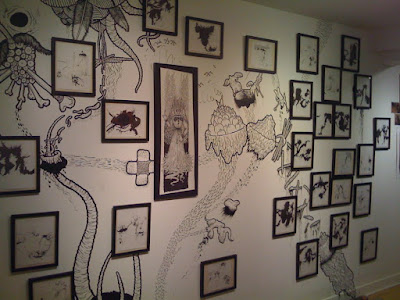 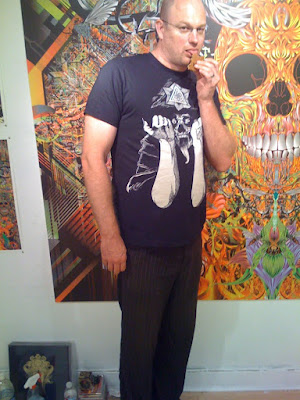 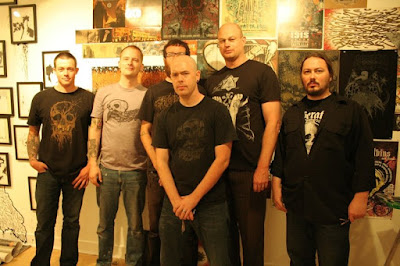 pictures (from top to bottom - cont. from post above):

1. mamiffer "hirror enniffer" - a new hydra head release coming out 9/23 (tuesday). masterminded by faith coloccia (former participant of everlovely lightningheart, current participant in pyramids, and collaborator for upcoming house of low culture recordings), with contributions from chris common, brian cook and ryan frederiksen (these arms are snakes), myself, and annie and ben from helms alee (who also just released a new album on HHR). the album can be preordered from HHR here and sampled in its entirety here .

2 & 3. house of low culture "hollywood squalls" cassettes. 2 tracks, roughly 30 minutes, culled from a live recording from 2007, mixed and mastered by james plotkin. handmade cassettes produced in in conjunction with the most recent HOLC shows. edition of 50, the remaining copies of which made available through the hydra head webstore, and possibly live HOLC or isis shows if any are left by the time those actually roll around.

4, 5 & 6. snapshots of my installation in the "catalyst" group exhibition at the fifty24sf gallery in san francisco (more info/pics here ). consists of wall painting with 40 framed drawings from the old man gloom "christmas" album artwork. the gallery will continue the exhibition through october, so if you are in the area go check it out. there are prints and posters available at the gallery from myself (see past post for print image), as well as many of the other participants (seldon hunt, aaron horkey, justin bartlett, stephen kasner, etc). there is talk of bringing this show to LA in 2009, an event which would be pleasing to all involved.

7. seldon hunt licking a cookie in front of his piece at the "catalyst" exhibition. alluring.

Is there a link where we can see pictures of the entire exhibit with all of the featured artist's work? I clicked the 'more pics/info' link, but it was all info. I am inclined to see it all now, you tease! I kid. Lovely job though dude. Thank you for sharing.

Looks like a great show, I'm excitedly awaiting the Catalyst Book from upperplayground. I saw online somewhere a photo of you painting(?) the wall installation... were you in fact painting? Or using ink?

Lastly, the Mammifer album sounds absolutely fantastic, great job to all involved with that one! I hope it continues as a musical project and not just a one-off piece!

your installation is badass! were the old man gloom drawings every released commercially for sale?

my name is dimitrios kaitsis, i´m from bochum in germany. I studied history of art and finished my studies with a thesis about matthew barney.

I am interested in arranging an exhibition in a gallery around cologne with your artwork. It won´t be something big. I´m thinking about to get in touch with a small gallery which is interested in modern artwork that is directly connected with music.

I don´t know another way how to get in touch with you. If you are interested please contact me or if you want me to contact your management, please let me know.

It would be a pleasure for me to hear from you.

This really looks great. I know you've probs been asked a zillion times, but do you sell prints of your work anywhere? My wall would look better with your stuff on it.
Easy.
Alex.

Please let us know what is the situation with Isis is at the moment?

We havn't heard any new news for ages greatly aprechiated thank you!

I'm currently listening to JODIS - Continents on plotkinworks. Overall It's mellow but the vocal delivery near the end adds an almost epic intensity to the piece. I Really love it and hope others will checked it out.

On as side note I thought you or AHarris would find this interesting, (that is if you guys haven't heard of it already) It's called a Hang drum.

Apparently one was used in the 1972 Solaris soundtrack.

Yes! I've finally found art that I landed on and fell in love with @ first sight! I would most definitely love to come and visit art museums such as the art on the website itself. If there is any art of its sort in Southern Los Angeles, PLEASE! let me know so I can help put the word out! We are all one and we are all willing to help!!! :)