CLOUDS art pt 1 AND thanks AND no thanks 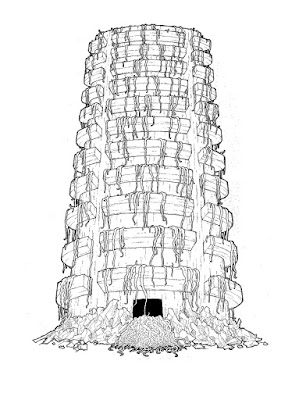 above is a preliminary drawing for the forthcoming clouds album "we are above you". this drawing had yet to be approved for use by the band and therefor may be scrapped, but hopefully this will not turn out to be the case. this drawing is intended for the cover of the album and will be colored and situated in some sort environment before it's complete, but this is a beginning at the very least, presuming the band approves. i'll continue to post bits and pieces of this layout as it comes together as it's my priority project at the moment.

the "decimal" album by ringfinger is out now, available digitally, as well as on vinyl from magic bullet records. the band is the brain child of a long time friend and champion of music by the name of tracy wilson. i contributed vocals and guitar noises to one track on the album, which also features contributions from members of engine down, dälek, steve brodsky, and a slew of others. i recommend, and not based on the fact that i was a contributor, but because it's a sincere and well executed piece of work.


in the off hours: leviathan "conspiracy against all life", clouds "we are above you", helms alee "night terrors", caleb carr "the alienist", "no country for old men", "twin peaks" DVD box set, il cappricio pizza, pilot hi-tec-c pens, ellis and nord "ultimate human", guilty simpson "ode to the ghetto", etc.

thank you and goodnight.

Hey man, interesting art for the Clouds album. Where is it coming from, conceptually?

I'm curious concerning the new Jesu EP "Why Are We Not Perfect". Justin has said that it's coming out on Hydrahead. Will you be contributing art?

Just try not to let the anonymous dude bug you.

your pattern making (the vines) and intricacies within the design are really awesome! I'm looking forward to see how this develops, the tower looks interesting, very mythic.
It would be intriguing to see your design process too: I tend to go through multitudes of ideas before a preliminary! How did you get to that image?

I do so love to see what books, albums, film, etc, you're currently enjoying. You often point me towards something new. Hope you're enjoying The Alienist, No Country for Old Men, and Twin Peaks, as I'm a fan of all.

I'm reading "The Alienist" also and so far it's one hell of a read. Thank you for posting your art and giving the skinny on your projects. I enjoy your blog, art and music very much.

decimal is great, wish someone would release it in the compact disc format *coughcough*

love the design, really keen to see how it turns out.

following on from nathan's comment, i'd love to know more about your process, is that image all freehand, or do you work out things like perspective points and all that jazz?

Illustrations are becoming more and more Darrow-esque. This is a compliment.

For those that enjoyed The Alienist, do yourself a favore and skip the sequel; Angel of Darkness.

your sketches always have such incredible textures. well done, as usual.

Nice drawing. I hope you're going to use alpha channels from here on in when you assemble it. I see so many people ruining fine detail with that damn Illustrator live trace operation.

I don't know about you, but I find that when you have spent a lot of time on detailed line art, the real danger is ruining the existing monochromatic subtlety with colour. Good luck, I'm curious to see the final outcome.

I'm really excited to see where this heads, and how you will lay it out. Looks like it will represent their gritty, monstrous riffs pretty well!

Do you run across a lot of "we don't really like where this is going" or "can you do this to it instead?" from bands and clients you work with? Or how does the process usually work for you?

I'm reading House of Leaves at present. Not too far in, but what a mind fuck!

Yo peeps: Read House of Leaves.

The discussion of typography in the recent post/comment thread made me think that you (and your reader folks) would be interested in this:

The guy is doing a project cataloging characters (letters) he finds in random graffiti tags around NYC.

please update your blog, i feel the need, the need to read :)

i love your artworks, and love to see here some preliminary drawings of the past isis' releases. is it possible?

it would be a very light-hearted thing, consedering the polish grey and depressive almost none-spring here ;]

anyway, hope to see you soon on the polish gig somewhere...

Hello. This post is likeable, and your blog is very interesting, congratulations :-). I will add in my blogroll =). If possible gives a last there on my blog, it is about the Notebook, I hope you enjoy. The address is http://notebooks-brasil.blogspot.com. A hug.

I swear, I didn't make that CD comment, ha!

Nice post.I like your drawing and i am also hopeful that the drawing will be approved and we will see very soon at the main cover.