THE PAST IS THE FUTURE IS NOW! 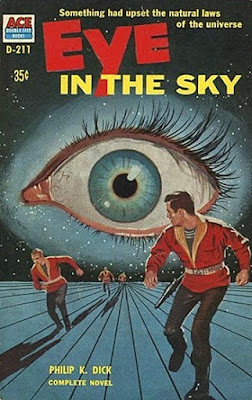 Below: An excerpt from "Frankenstein's Cadillac" by Alan Moore from the new issue of Dodgem Logic regarding the media phenomenon of science fiction and its direct relation to critical cultural and political events. Posted for those who may not have ready access to this fine publication....

"Outside of literature, the other media in which science fiction manifested were even more gloomy and unsettling in their concerns. William M. Gaines' terrific E.C. comics line would feature gorgeous adaptations of Ray Bradbury alongside memorable twist-ending S.F. that would sometimes deal with issues such as racism or nuclear holocaust, while on TV Rod Sterling's mesmerizing Twilight Zone would take a similar approach to a broad spectrum of America's subconscious longings and anxieties. Possibly the most candid glimpse of the American mass mind, however, is afforded by the S.F. movies of the era, mostly unmitigated exercises in paranoia. The original Don Siegel version of Invasion of the Body Snatchers, made in 1956, seems to be serving up a metaphor for the insidious spread of communism as it was perceived in that McCarthyite decade: just like the movie's 'pod people', your neighbor down the street might have become communist and yet would look the same. Alternatively, given that the most offensive thing that the pod people are seen to do is to allow their neighborhoods to go to hell, with potholes in the road and uncollected garbage, it may be that they also represent a generalized antipathy to immigrants of any sort, be they poor whites, blacks or Hispanics, on the Daily Mail grounds that this might affect property prices.

With director Robert Wise's The Day the Earth Stood Still in 1951, conversely, we have the suggestion that space visitors might well be more evolved and more compassionate than we are, with any encounter liable to reveal humanity itself as the real monsters. Far less thoughtful or well-made but more unwittingly revealing is director Bert I. Gordon's Amazing Colossal Man in 1957, during which a man exposed to nuclear radiation grows to such a monstrous size that he can only wear what seems to be a giant nappy. Being bald, this gives him the appearance of a hundred-foot-tall baby who seems unable to grasp why suddenly nobody wants to be his friend or even get too near him. Wounded by this wholly understandable rejection, the enormous radioactive toddler throws a tantrum and goes on a rampage in his diapers. It's not difficult to see a parallel with the U.S., which in terms of history was in its infancy when it acquired the atom bomb and suddenly became the biggest and most powerful nation on the planet, not to mention the most feared. If Gordon's movie can be seen as a delayed American reaction to the nuking of Hiroshima and Nagasaki, it is interesting to consider Japanese director Inoshiro Honda's first Godzilla offering from Toho Studios in 1954 in the same light, as unintended metaphor for Japan's own relationship with nuclear power. The earliest films in the series unambiguously show their saurian protagonist as an embodiment of the destructive power inherent in atomic energy, a thing that breathes radioactive firestorms and can trample entire cities. In later films, however, made after Japan modified its attitude regarding nuclear energy, Godzilla is now friendly, capable of speech and lives with other amiable monsters out on Monster Island, ready to protect his homeland should it be threatened by external forces. Science fiction, always something of a magic looking glass in which we conjure visions of an idealized futures, would seem in the 1950s to have been reflecting darker and more troubling possibilities, or at least partly so."
Posted by Aaron B. Turner at 9:34 PM

I've been reading PK Dick's work, and what strikes me the most is his humanity on defining relations with the other. It's as if he dwells on Plato's notion of soul and it's immortality by definition.

Of course one can see all kinds of political statements or criticism over society, but ultimately it's the core of human relations that is best portrayed in his work

Check out Jameson's archaeologies of the future if you haven't, the chapters on PK Dick are interesting.