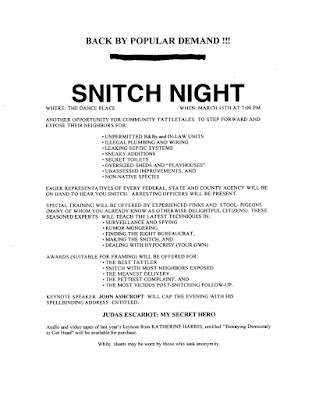 above: supplied by a friend who shall remain nameless. proof that community spirit and activism are alive and well wherever one might live.....

and now some news:

jodis: work has commenced on the follow up to "secret house" jodis' full length debut from last year. the line up for the new album remains the same as the prior record (james plotkin, tim wyskida, aaron turner). there is no set deadline for completion of the album, but it will likely be finished before the new year and out sometime shortly thereafter.

mamiffer: aside form the completion of the new album "we speak in the dark", there are a couple more mamiffer things already in the works. one is a track for a split release with fellow north-westerner demian johnston and also 3-4 tracks for a new EP (or possibly full length). again, no set release date for any of the above mentioned projects, but as soon as things are solidified the info will be posted here. the long overdue split LPs with oakeater and house of low culture will both be out in november.

house of low culture: as mentioned above the split with mamiffer (the first new HOLC release in several years) will be out in november. as noted in previous posts, HOLC has a collaborative project in the works with tom neely called "the wolf". HOLC's portion of the project (the audio component of a book/album set) is now half finished - of the four chapters in the book two now have complete scored pieces based around the foundational elements of guitar, voice and electronics. clips will be posted soon.

lotus eaters: following up the CD release of the lotus eaters album "wvrmwvlf" a few years late, the vinyl version is finally in the works. as with the previous vinyl reissue of our first album "mind control for infants" this vinyl edition will also be handled by the ever awesome taiga records. also like the previous vinyl reissue all the tracks on the album are alternate mixes from what appeared on the CD version and the set will also include a bonus track - an alternate mix of a track originally released on 7" by drone records some years back and long since out of print. more on this as it comes along...


and some things that i've enjoyed as of late: evan caminiti "west winds", fever ray s/t, watain "lawless darkness", einsturzende neubauten "1/2 mensch", bell hooks "will to change", caethua "i may be gone for a long, long time", king midas sound "waiting for you", michael daforge "lose" #1 + 2, celeste "misathrope(s), etc....
Posted by Aaron B. Turner at 11:44 AM

Very much looking forward to all the new releases and new music. Especially Mamiffer.

I'm glad to hear new Jodis is on the way, looking forward to hear some samples/songs. And please, no japanese exclusive track this time.

DAMN, Mamiffer, HOLC, Lotus Eaters, AND Jodis, now all we need is some OMG! Cant fuckin wait! Is that Mamiffer/Oakeater LP the same material that's on the cassette, or is it different?

Still waiting on the last releases from Isis

I'm so excited for new Jodis material!!! The first record was criminally underrated!!

Too bad there is nothing announced regarding Old Man Gloom... I'm eager to hear your new music.