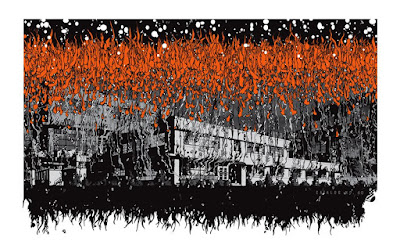 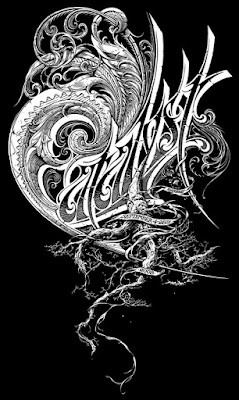 the first image above: preview of a large silkscreen print based off of the agoraphobic nosebleed "pcp torpedo" 2xCD layout that i designed for hydra head a couple years back... well maybe it was as recent as 2007. anyway, the print is going to be part of my contribution to a group exhibition taking place in san francisco at the fifty24sf gallery, opening on september 4th. the show is titled "catalyst" and will feature works from a host of interesting folks including but not limited to: seldon hunt, aaron horkey, stephen kasner, justin bartlett, etc.

....and..... below is a press release about the catalyst exhibition written by none other than mr. eugene s. robinson (for those of you who don't know, eugene is the frontman for the inimitable oxbow and author of the recently published "fight", on harper collins/audio version on hydra head):

The aural to the visual, the ears to the eyes, and the ragged run through limbic systems both animal and even vegetable, the graphicists who have made their way into carving a visual fucking identity for our soundtrack are no less compelling visionaries because they deal in imagery. It is the opposite, in fact. The lasting memories of that which is seen, emblematic of the same unspecified disaster that's framed this post-post-modern thing of ours, fiercely clings to our understanding of the place, the space and the time of our lives. Like eight shots across the bow of the lame and the same, Seldon Hunt, Josh Graham, Aaron Turner, Justin Bartlett, Aaron Horkey, Stephen Kasner, Dwid Hellion, and Florian Bertmer contest the assumption that this fine art thing, this aesthete thing, this dainty goddamned pursuit of color, lines, concepts, and meaning need be left to the pampered boulevardiers and galleristas. Far from it, this stuff is coming, not from some place nearly so prosaic as the illusory STREETS, but from the heart, balls and soul of a Promethean desire for ILLUMINATION.
In other words: they're going to SHOW YOU SOMETHING. Whether you like it or not. Whether it serves your purposes or not. Beyond irony and therefore almost outside of comfortable efforts at mockery, THIS art [yeah, I called it art] sidles up to you. It insinuates its way into you and while turning away or closing your eyes is always an option there still is that thing that marks these moments as different and that IS their aural qualities as well. Fury, sound, symbol, and the capture of it all in a flash of light and dark and everything else in between.

This is alright. This is goddamned OK.

And if you leave here unaffected it will be, in all likelihood, because you left here dead.

will those prints ever be available for sale?

that looks pretty cool. I am glad it's in SF for a change ;) Are any of the artists going to be at the opening?

Incredible print.Hope some make it home to BCD.I need one!

Check out my blog sometime,A.

shit... i wish i could make it up there for the opening.

This looks like it'll be a great exhibition, lots of talent in one room! Looking forward to seeing/hearing more about it

Greeting from Taiwan~
Just came across your blog. The first illustration is amazing. Keep up the good works. Good Luck〜

Hey Aaron...it would have been real cool seeing you in SF but we arrived too late and you had already taken off. Perhaps we'll have another chance to catch up in another ten years or so...

Got the print yesterday. It's amazing. Is there any way to get a high-res of it? I'd love to have that as my computer wallpaper.