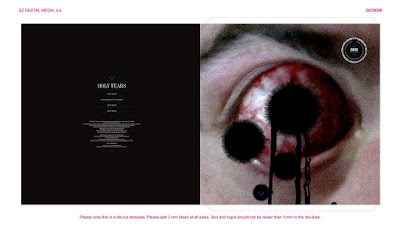 hi again.
glad to see some folks have already caught on...
please spread the word.
thanks to everyone who responded with offers to build a site for me.
i may very well get in touch with some of you about this.

for the time being i'll leave you with another new piece. the above is the 12" jacket for a forthcoming ISIS single for the track "holy tears". both the cd and 12" are being released by ipecac, and both contain the album version, a live version of "holy tears" (the live track features justin chacellor on bass/effects as well), and a melvins/lustmord remix of "not in rivers, but in drops". the cd version also contains an amazing video for the title track, directed by dominic hailstone. some of his work may be found online and i strongly urge you to seek it out.

you can also view a larger version of the image here: http://www.hydrahead.org/hh/4Aaron/ISIS_HT_12inch_sleeve.jpg

lastly, someone asked about the cavity layout i mentioned in the last post..... hydra head will be rereleasing the mammoth "laid insignificant" album (originally released on bacteria sour) in feb. or march of 2008. so far there are only plans for a CD version, but hopefully we'll b able to do an LP as well.

layout looks good! very neat..i'll do my best to pick one of these up for collection purposes.

the holy tears artwork looks fantastic. seems like a bit of a departure from the look of some earlier work, and i dig it immensely.

keep it up monsieur feral.

ola !
Nice visual for the upcoming single,
i hope to see more of your works
very soon.
RESPECT...
if you want to visit my blog.
fragment-com.blogspot.com

Just noticed the blog. Nice work; I've been a fan of your art for some time (since about 2000 I think). Isn't it weird (and cool) to see how much bigger this sector of music is than it was in the days of Celestial and Jupiter.

Good stuff anyway, and I'll be checking back often.

hi aaron
just a word to say that i appreciate a lot your work (art and music). You're an ispiration for me!
thank you very much!
:)

p.s. can't wait for the return of isis in italy..

great, looks good indeed. sometimes i'd love to see the artists (yourself included) trying to explain their vision. i know we must have our own interpretation but...